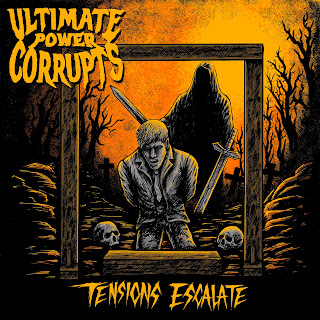 Ultimate Power Corrupts has figured out a metal recipe that even ol' Beelzebub himself would be damn proud of. Legions of bands today are blast beating the interest right out of their music, and the word "breakdown" must have perished with metal master Dimebag Darrell because you sure don't see much of it these days. That's what I thought, anyway. Then I listened to Tensions Escalate, and my faith in the genre was devilishly restored. This 4 song introduction to Pennsylvania thrashers Ultimate Power Corrupts is an intense stride into the battlefield of metal with the difficulty set to brutal while every squad member on your team is a rotting cadaver except for you. Yeah, you're going in alone, soldier. "Bad ass" is what this EP should be titled. Tensions Escalate grabs you by the gronies right from the very beginning and ruthlessly squeezes without any indication that this physical from Hell will ever be over. The drummer often sounds like the world's most impressively functional cocaine addict from the masterful percussion work and insane speeds accomplished throughout the recording. Every tom roll, bass strike, and snare pop are perfectly placed and beautifully timed. Much of Tensions Escalate is reminiscent of early Sepultura, bringing back fond memories of the glory days of Arise and Beneath the Remains. Powerful breakdowns drive some of the most crushing sections of this EP (I'm looking at you "By Any Means Necessary"), and the guitar work is consistently tight. Vocals are in the safe range for thrash metal, meaning they are the heavy constant one would expect from a killer recording like this, but don't tread far off the beaten path. The bass guitar has a twang punch to the balls that really helps keep the rhythm flow with all the surrounding chaos. Ultimate Power Corrupts is a breath of fresh air during these questionable times. It would appear that thrash metal is truly alive and well, and apparently living in Pennsylvania.

Posted by soulgrinder at 1:32 PM No comments: 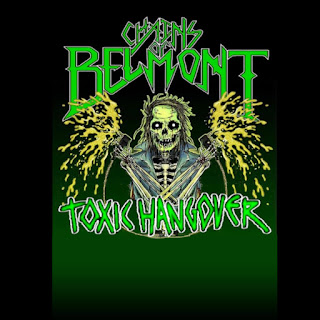 The riff amount on this release is monstrous. Denim jackets with patches, cool lyrics and ofcourse the kickass thrashing attitude and music – it's all here. From the first second of the first tune intro, one can clearly hear the main influences of this one: Nuclear Assault's Game Over, D.R.I., C.O.C. and the more hardcore influenced material of Suicidal Tendencies, because there are really so much simmilarities on here, also i bit of german thrash influences. Cool guitar tone (crunchy and powerful) makes this release thrashier than it would be with that eighties sound. As I expected, the vocals are not even slightly technical or schooled… AND I LOVE IT! The producer obviously listened to a lot of Overkill records, since the bass is very audible and even though there aren't any technical or hard lines on here it's fun to listen to. The drums are fkn solid. If you want to have fun drinking beer and thrashing outl, while you're searcing a sofa suitable for ''stagediving'' off it, Toxic Hangover is your best friend !!

Posted by soulgrinder at 8:59 AM No comments: 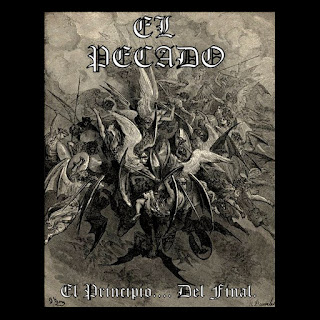 This cassette features the demos from 94' /95'. The elements that make El Pecado an interesting band is the Spanish vocals, the crunchy nasty riffs and the crazy lyrics.  You can’t help but flash a smile every once and a while at their deranged sense of brutality. You won't find a crystal clear production. Everything is audible, from the guitars, to the drums, to the bass, to the vocals, everything is easy to process and therefore easier to listen to and Of course they keep the brutality here. There's some blast beats in sight.  There is variety in the sound, angry vocals and growls including the occasion scream. This is something quite special. From start to stop, “El Principio...del final” provides the listener with thrills and chills, bangs and crashes and more catchy, head-banging moments. This is pretty memorable!

Posted by soulgrinder at 8:47 AM No comments: 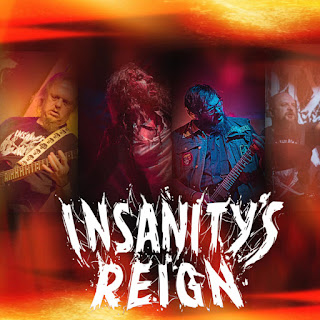 Bay Area oriented thrash riffs but in a malevolent way and orthodox lead guitar madness ala Hanneman and King, “Insanity's Reign” could be summed up as a serious effort. Essentially taking a high octane Nuclear Assault meets Slayer formula and simplifying it to one that doesn’t bother with mid tempo grooves or breakdowns. There are times where things momentarily settle into a moderately paced crunch, with a slight bit of a Kreator feel, but even on what would assumedly be a token slower song,  and that is far from a bad thing. The riffs are both blinding and well detailed, actually coming off as modern in the sense that they are adding further detail to an existing template, yet produced through a guitar sound that is archaic and smooth.  Let alone the beautiful madness that follows this kick ass band. Don’t listen to the Debbie Downers out there who want to be all progressive and depressive at the same time, this is the real deal. Hell, you shouldn’t even be listening to me anymore, now pop this thing in and experience the heaviness of Insanity's Reign, damn it!

Posted by soulgrinder at 8:30 AM 2 comments: 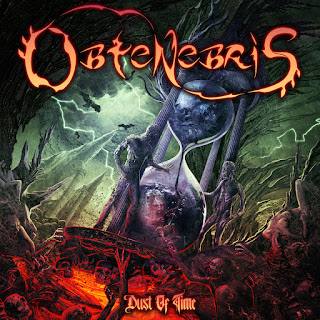 I would say that it's quite good, and definitely worth a listen by all measurable standards. And besides, who doesn't enjoy a good dosage of Fucking Metal? Nobody. Most of the problems I had with this kind of style/sound in the past was the lack of brutality and the repetitive sound, but Obtenebris proved me wrong here. This album is filled with killer leads, i can feel like the emotion here, the solos aren't melt-your-face-off intense or anything, but they are very fitting for each track. The production is extremely good on this record, at the same time i feel the raw intensity too. I liked every song on this album. The album is filled with lyrics of battles. The lyrics aren't complex and that's good. Memorable riffs and melodies, thunderous vocals, and it kicks ass. Simple and LETHAL!

Posted by soulgrinder at 8:09 AM No comments: 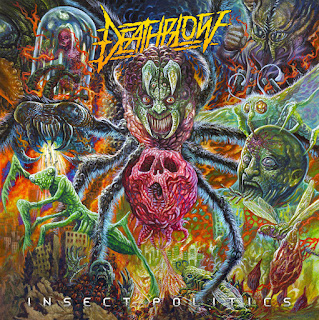 Deathblow decided to give thrash a big ol’ injection of cocaine in the eyeballs so that everybody could wake the fuck up and see what they were missing out on. Man, it’s been a while since a thrash band really grabbed me by the balls and made me angry and hyped the way that this band does. To be honest, my thrash tastes usually range on the nasty and brutal side of things, because I find if I’m looking for straight-up heaviness I gravitate towards death metal naturally. Insect Politics gives no fucks about genre preference. It’s a thundering slap in the face that gets your blood pumping as good as anything. Deathblow realizes that the key to writing a great thrash album isn’t just to recreate the exact riff style Kreator had in the 80s, but to instead use that as an occasional reference point for making heavy and punishing music. There is not a single moment wasted on this album.  Insect politics alternates between explosive, ripping songs like “Accelerated Decrepitude”, “Nefarious Ends” and “Insect Politics”, and tasty grooving numbers like “Brain Bugs” and “Convert Or Die”, with a little bit of everything in between to keep things Interesting. The album strikes the perfect balance keeping things diverse enough to hold your attention throughout. The riffs are entirely thrash fucking metal. They like riffs and you can feel like you're banging your head against the stage. You’ll always find me enthusiastically praising thrash and Deathblow aren’t an experimental or unusual band, but it’s not that they’re doing anything different, it’s that they’re doing everything right. A pure thrash metal album !!

Posted by soulgrinder at 7:42 AM No comments: 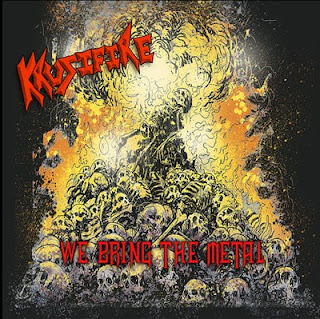 “All Or Nothing” set in. This piece marks the first of 12 gargantuan highlights due to its drilling riffing, the relentless drumming and solid bass lines. Did i mention the really mean riffs?. The opener is really a very nice slug in the face, the remaining songs of this album deliver pure gold, murderous attack. Straight fury and a voluminous sound catapult this album into the thrash metal world. “We Bring The Metal” spreads powerful and violent vibrations. “The Condemned”, the strong and expressive “Brutal Reality" make you have a drink, a large beer better. Absolutely irresistible if you like your music fast, you want to lead a better life, get your copy of this album as soon as possible. It is fkn solid and fascinating experience.

Posted by soulgrinder at 7:22 AM No comments: