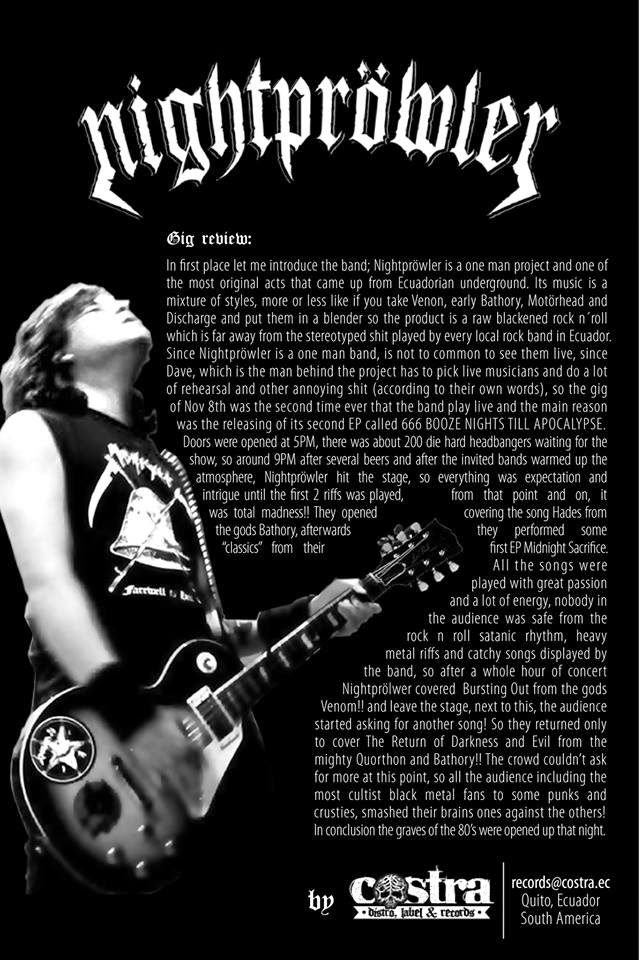 Posted by soulgrinder at 7:26 PM No comments: 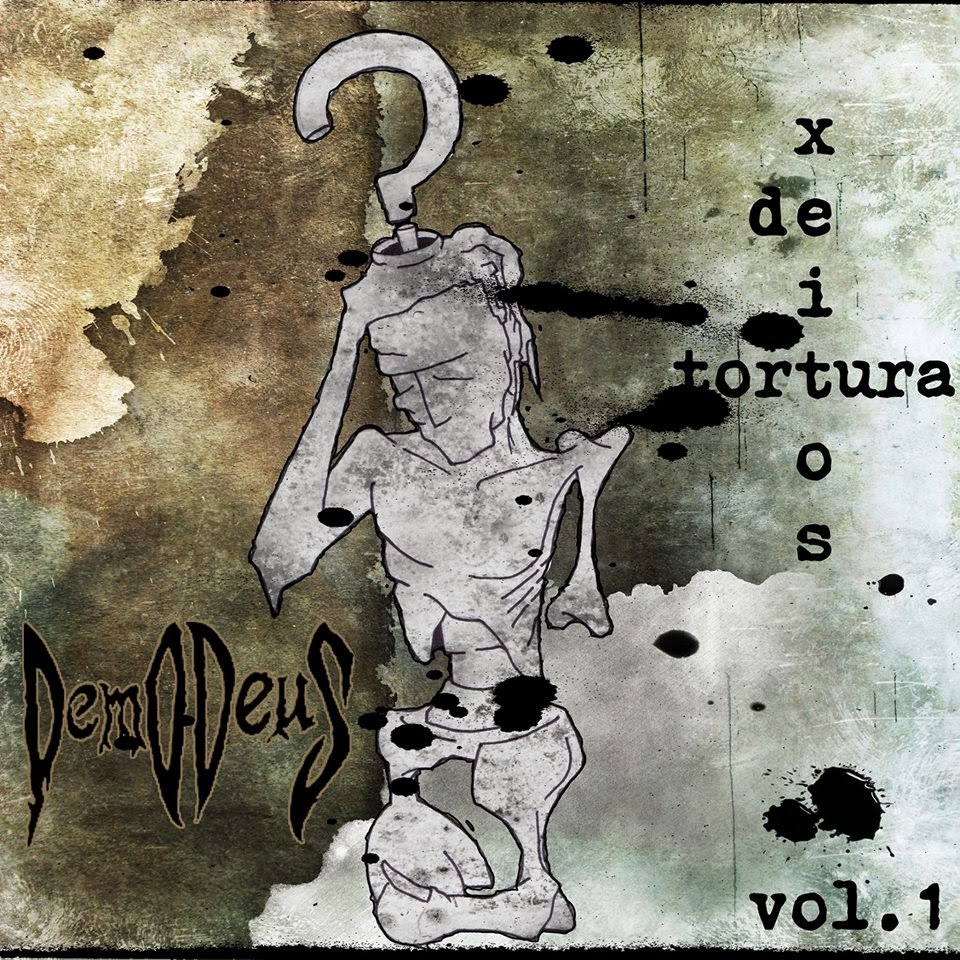 The drum bass on this album is the punchiest, the riffs are rough, and the length is just right for such a show of force. I never thought highly of those twisted, jarring solos. Vocals in the vein of Morbid Angel and Immolation, It’s impressive going up and it's something memorable. There’s nothing docile about this album. It’s almost 15 minutes of death metal that’s packed tightly with a thick brutality and  it’s able to do very well, a real keeper.
www.facebook.com/pages/DEMODEUS/212312528814102
http://demodeus.bandcamp.com/
Review by Paul Caravasi
Posted by soulgrinder at 9:07 PM No comments: 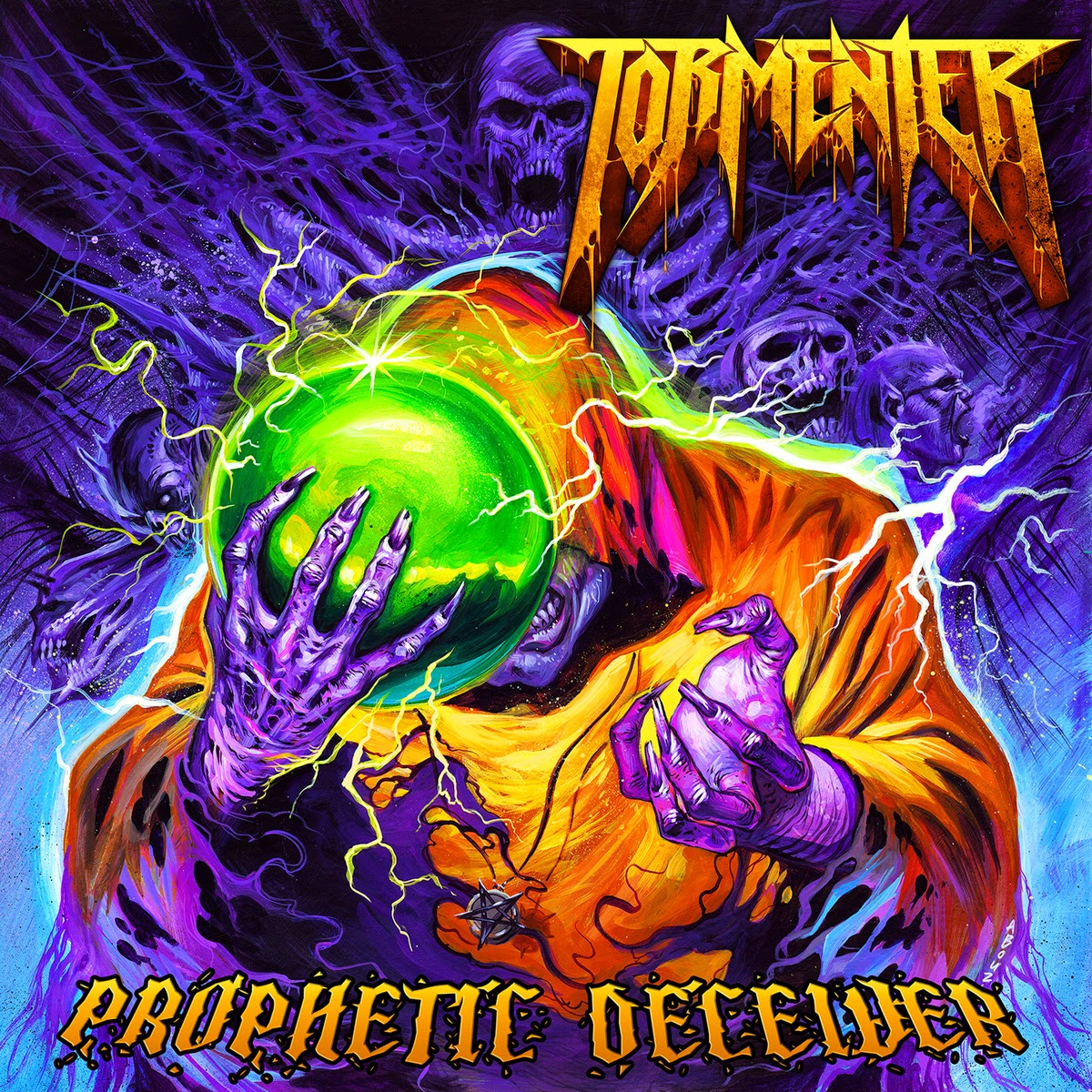 The album opens with a clean guitar, then bam, the riffs are in full force. Catchy, not boring, original?? maybe, try not copying anyone, and crunch tone, the whole album is like that. Crunch tone guitar and killer vocals, the leads are very advanced and wicked. The rhythms just dominate, really great to have this band playing some awesome thrash! Energy stricken music with songs just dishing out pure unique thrash metal. I absolutely loved the mixing and production. Everything is just right. The bass, vocals, guitar, and drums. A superb job in that department. Nothing left out at all. This is an album that you can listen to over and over without getting sick of it. Thrash is back with a vengeance! If you're a fan of thrash metal and haven't heard this one yet, check Tormenter out ,If you think I'm full of it, then just listen and you will hear pure original thrash metal that is totally awesome. Great to have this band from California playing Thrash Metal in full force!
www.facebook.com/tormentermetal
Review by Paul Caravasi
Posted by soulgrinder at 8:49 PM No comments: 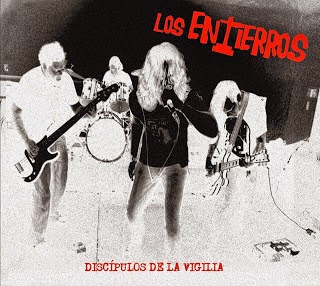 The music of Los Entierros from Peru is so simplistic and sludgy, almost cumbersome, yet so completely appealing on multiple levels, the guitar sounds as if it's being played through a broken amplifier which fell off the back of a pickup truck one too many times, and the bass is just a plodding distorted rumble. Los Entierros possess a modicum of musical skill, creating some noisy and offensive guitar solos. Actually, when I first heard this band, I couldn't stan them because of these same solos of squawky excess, but at this point I have to slap myself because the leads actually fucking rule. There are eleven songs on offer here, completely catchy and headbang worthy. And the vocals! Man, I like it enough, he has a really melodramatic voice that reminds me, in a way, of creepy Italian horror films. It's strong and powerful, and at totally unexpected times (usually in the middle of a phrase) he'll suddenly switch from a chilly melodic wail to a demonic rasp/snarl.The vocal melody in the verses is absolutely cool and will ensure that the songs remains in your head for days. Yes, this is another metal release that conjures up a really powerful feeling in me. There are some albums which you just put on and totally sink into, totally feel that you understand absolutely and that resonate on some deep, subconcious level that goes beyond mere ideology. This is one of them. Maybe it's because i've been listening Grindcore and death metal, and my brain is already fried. It's short, but feels like a complete work as it descends gradually into the bowels of sludge and decay and leaves you there until you can pick your jaw out of the mud. There's no complexity, no technical wizardry, but the emotional content wouldn't be served by such an approach, and after all, this is Doom metal of the purest, most minimalist variety, ready to lay its burden on you and scrape your cranial layers with a trowel until you understand what it's trying to say, really has to be heard and praised, and is probably what will convert most first-time listeners into appreciators of this style of music. As a side note, anyone who appreciates Doom metal, definitely needs to check out this band, as in my view this is worth checking out!
www.facebook.com/losentierros
Review by Paul Caravasi
Posted by soulgrinder at 8:26 PM No comments: 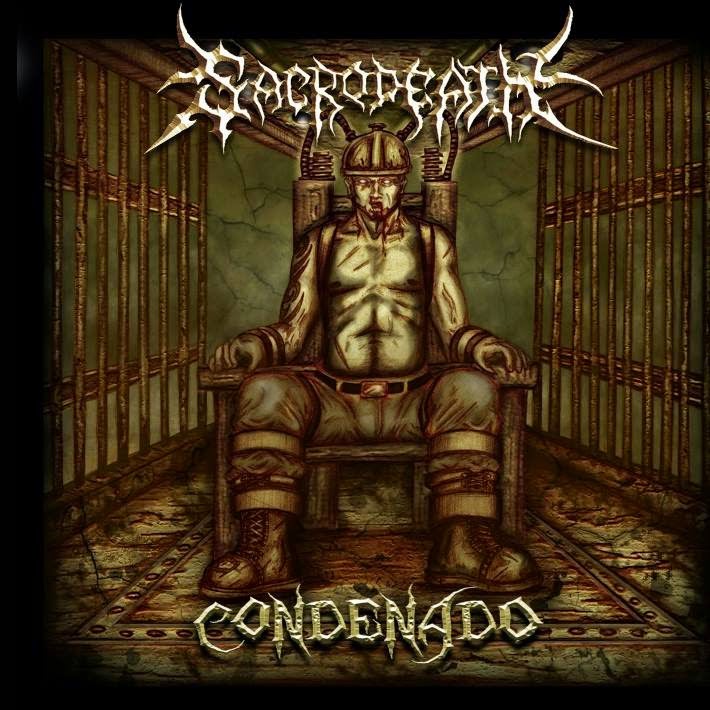 Death/thrash atmosphere we can find in this Ep, comes directly from that black Chilean flame. We are not talking about happy melodies, but really obscure ones, to create a morbid, sick and gloomy sound. Fast parts, with some slower and evil; screams alternated to growls and gloomy whispers from hell in the vein of the classic band Sadism, they sound fresh and they are worthy to be promoted by the powerful, modern production. The lyrics are written in spanish, "Condenado" shows a professionally working band which is  hungry for brutality. Check it out!
www.facebook.com/sacrodeath.banda
sacrodeath-chile.bandcamp.com
Review by Paul Caravasi
Posted by soulgrinder at 7:59 PM No comments: 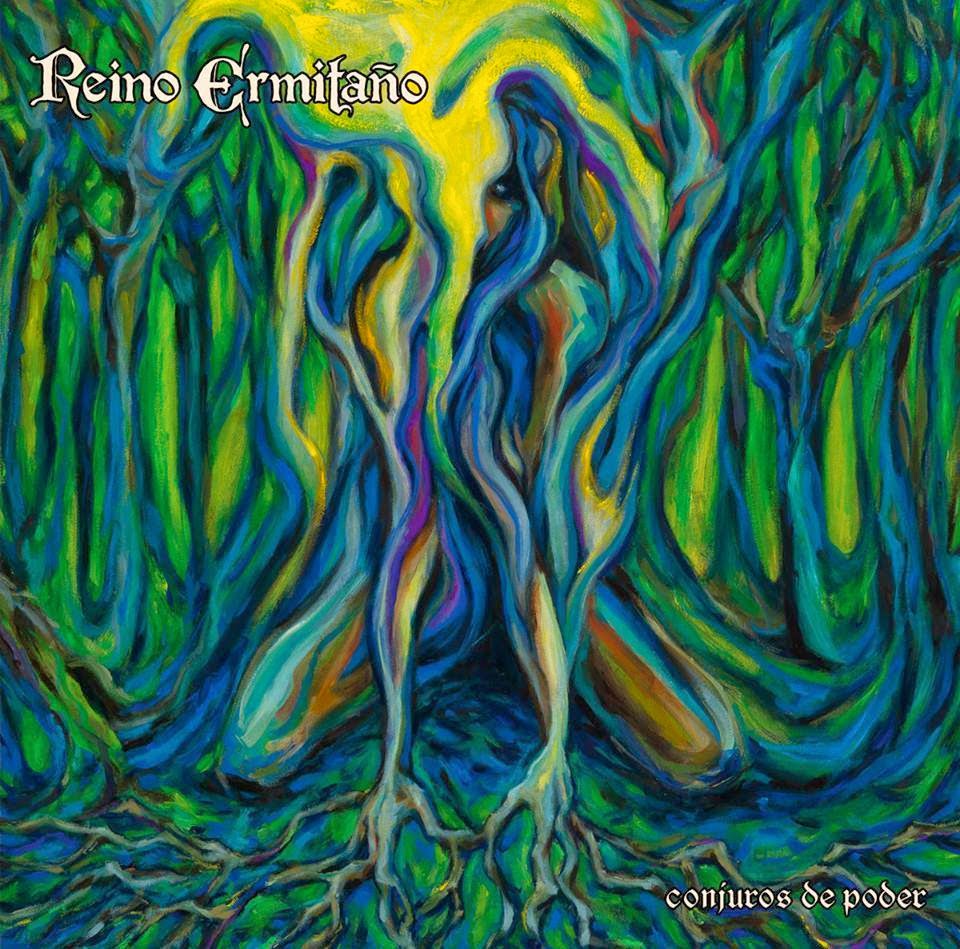 This is one of those albums which helped define my taste in Doom Metal. It was Black Sabbath the first time songs had actually scared me! This might sound quaint in these days of sicko extremity but back in the late 80s, only a handful of bands had the ability to give you the heebie-jeebies in their music, Candlemass for example. But here's a genuinely eerie quality to Reino's songwriting and performances on this album which set the band apart from other Doom metal bands from Peru at least, to me, can be mentioned in the same breath as Celtic Frost in terms of scariness, much more radical, leftfield, experimental, avant garde. On "Conjuros De Poder", they deal with fairly stereotypical lyrical themes of dark fantasy,ancient Peruvian history, and etc on the whole. But the songs are delivered with such panache, such skill, such emotion and such a fantastic ear for melody that you'll forgive them that. The entire album is a mourner's lament, a heart-rending ode to mortality. It will become a doom metal classic that's for sure. I say every single song on the album is amazing in its own right. You'll weep at the crushing, monumental beauty of the riffs the band come up with on song after song. Rifftastic highlights and I haven't even mentioned Tania Duarte's phenomenal voice yet! She is truly one of the greatest female vocalist metal has ever seen with a highly distinctive sound that is simultaneously so pleasing to the ears and powerful. Wonderful as his performances on the other Reino's albums might be, Conjuros De poder represents the pinnacle of his career. It is also the band's best work to date. All in all, this is definitely a masterpiece of doom. If you’re into doom at all, you’ll be into this album!
www.facebook.com/pages/Reino-Ermitaño/229687576031?pnref=lhc
www.facebook.com/ToxikoProducciones
Press Contact: ogrodoom666@gmail.com
Review by Paul Caravasi
Posted by soulgrinder at 12:11 PM No comments:

White Empress-Rise Of The Empress (2014) 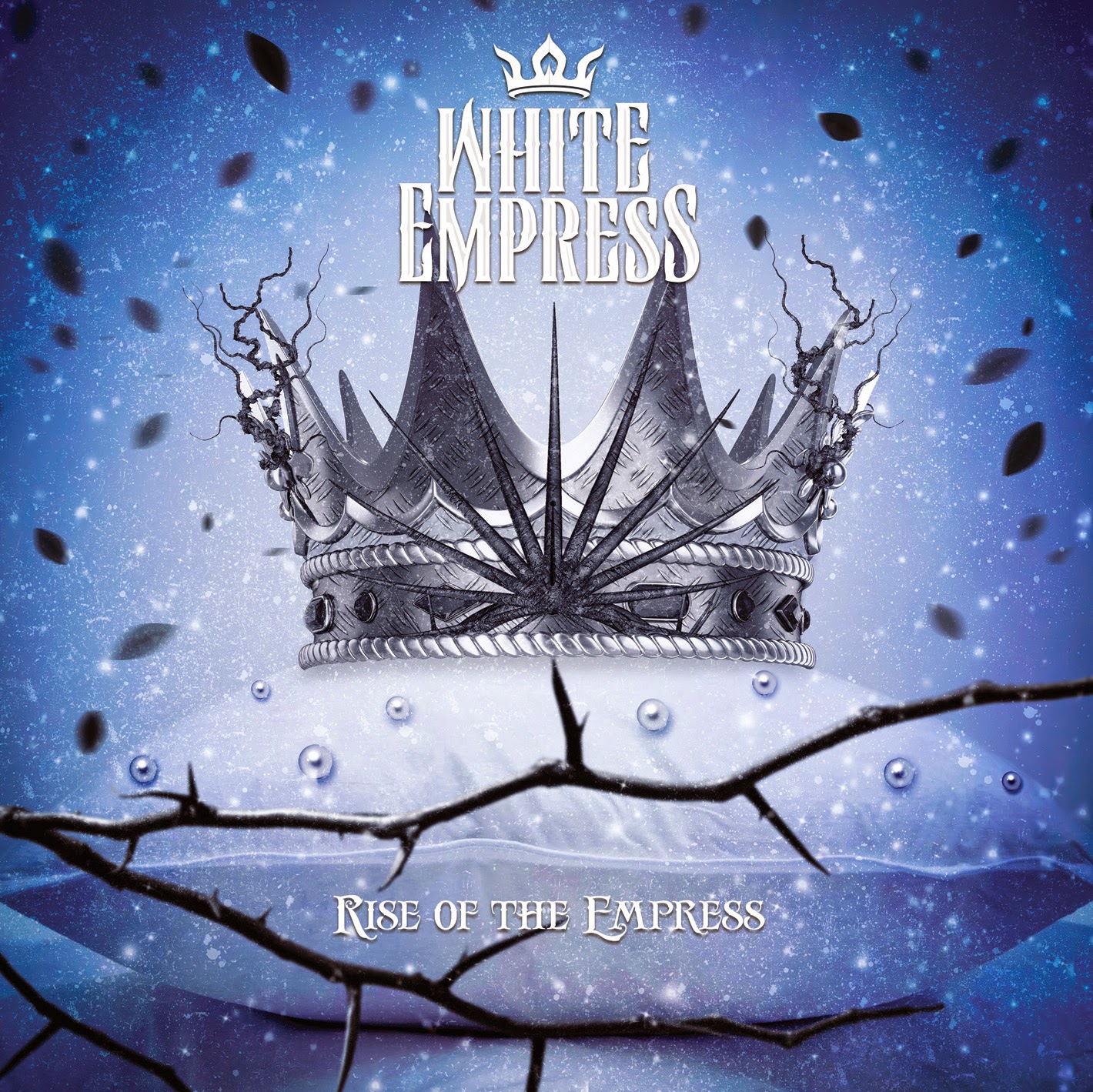 Well documented how much of an experimental band this is, this album instils that idea, contained elements of Death Metal, their music is more a kind of "Trip-Metal" than anything else, they manage to set themselves apart from the rest, and rightfully so, this band creates their daring and experimental approach to music. They create such a hypnotising atmosphere, flowing creativity and brutality. This release is filled to the brim with a powerful art. Musically, This is an absorbing album, some songs are cool but this style isn't for me.
www.whiteempress.com
www.facebook.com/WhiteEmpress
www.peaceville.com
rocha@fresnomediausa.com
Review by Paul Caravasi
Posted by soulgrinder at 5:11 PM No comments: 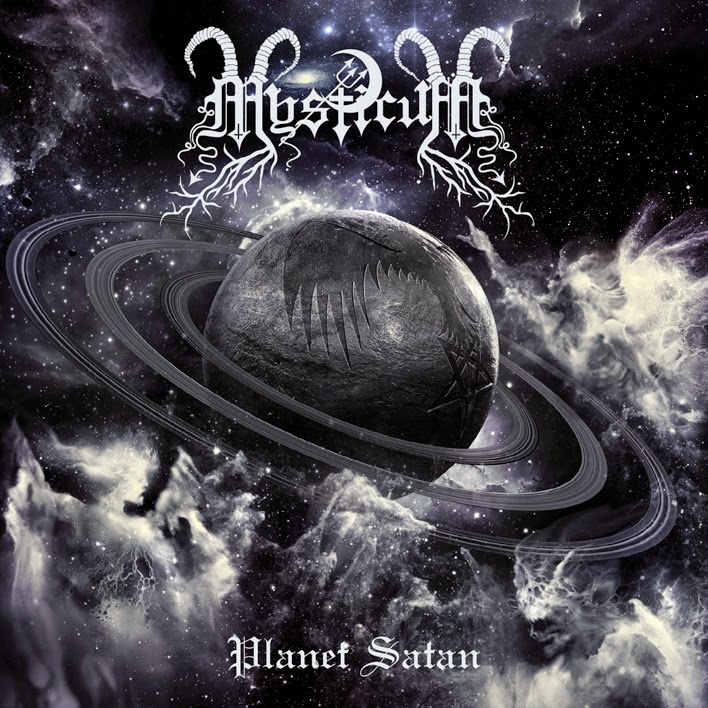 I'm trying something new and different, and it made an impression on my mind. The  combination of electronics and ripsawing guitars really got my attention with its unhinged Black metal madness and aggression, hyperspeed guitar riff over booming drums, distorted roaring vocals. The tunes will get your blood pounding like little else will, and then the vocals come bellowing in to make things even more incendiary. Who needs coffee in the morning when you can just fire up this band?, and don't let its being called "industrial" fool you--this album will take your head off if you don't watch out!
www.mysticum.com
www.facebook.com/mysticums
www.peaceville.com
rocha@fresnomediausa.com
Review by Paul Caravasi
Posted by soulgrinder at 4:52 PM No comments: