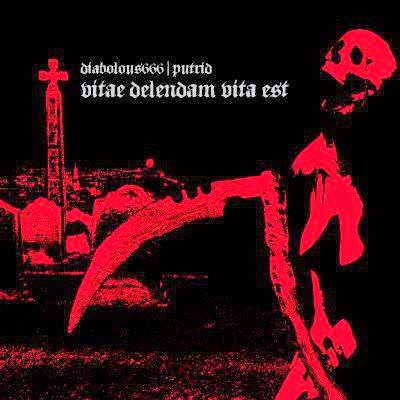 Undoubtedly one of most heavily anticipated albums ever in the Peruvian black metal scene (or what's left of it). How interesting that this album should come out now, when the black metal scene is definitely on the wane (stylistically, and in terms of enthusiasm, audience participation, and compositional originality) worldwide. are these two bands worth listening to? I believe so. Diabolous666's rabid hatred of Christianity is featured here, all the songs are raw as fuck and it sounds here like they even increased their potential for speed while widening his range of rhythmic techniques, blast in a straightforward manner, hyperactivity is translated here into multiple fill techniques (the sheer speed of which you probably will not believe), an original approach to changing patterns and beats beneath the guitars almost schizophrenically (but with a freezing precision that belies any sense of madness. Putrid attacks with a more Black/death metal approach, savage and straightforward to your fucking face in the vein of early Sepultura (Morbid visions era), it is brutal and Insane,. So, in my final summation, I think this is a very worthy release.I recommend listening to it, and I am sure it is going to be massively brutal to your brain.
www.facebook.com/sck666
www.facebook.com/putridattacks
www.pentagramrecs.com
Review by Paul Caravasi

Posted by soulgrinder at 2:27 PM